Whether you’re searching for a unique piece of jewelry, a beautiful Savannah memento or high-quality jewelry repair services, Golden Realm has just what you’re looking for. 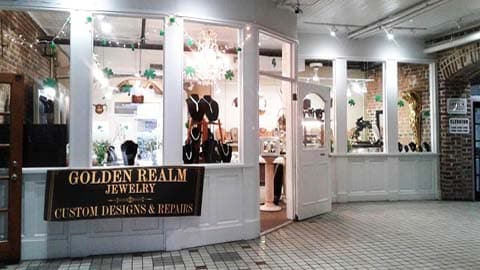 Nestled in the heart of City Market at 307 W. Bryan Street, Golden Realm offers a stunning selection of earrings, necklaces, bracelets and much more. Since 2013, Golden Realm owners Cindy and Steve Carroll have been delighting Savannah locals and visitors with their incredible inventory, including Savannah’s largest selection of cameos, as well as a wide range of collectible knives, coins and local artwork.

“Everything in the store is one-of-a-kind,” says Cindy. “I handpick everything. We find unique pieces no one else has.”

Cindy has a passion for customer service and an eye for amazing jewelry.

She helps customers pick the perfect jewelry settings, identify their favorite gemstones and makes each shopping experience memorable. This talented buyer searches the globe for unique merchandise and can share the history and story behind each item.

A master jeweler, Steve creates by hand many of the spectacular custom designs featured in the store’s glittering glass display cases. He’s also a go-to resource for heirloom and vintage jewelry repairs, which are all done on-site.

“Steve can fix anything,” Cindy raves. “What he does is mind-blowing. We do a lot of vintage jewelry restoration. He also fixes watches, candlesticks and clocks and can repair fine jewelry while the customer waits.”

A goldsmith and silversmith, Steve began welding, designing and making his own jewelry at a young age.

His grandfather, a Cherokee Indian, introduced him to the trade. After many years working with jewelry, he went to school to get certifications in advanced diamond setting, jewelry repair and design, casting and production.

Golden Realm also has a stone bank, featuring a wide selection of gemstones, from diamonds to colored stones, that can be incorporated into custom creations. The store even has a faceting machine on-site, which enables this master jeweler to re-cut fine gemstones upon request. 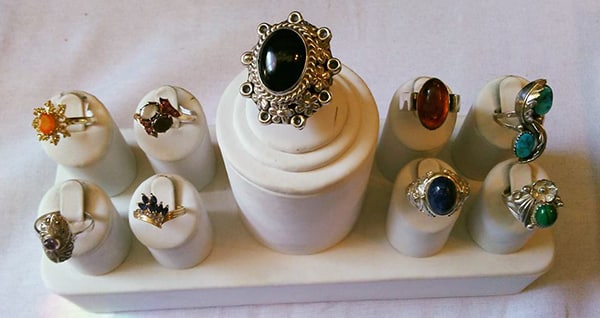 “We go out of our way to help our customers, whether they’re local or visiting Savannah,” Cindy explains. “When a customer can’t wait for ring size or repair because they’re headed home, we offer free shipping. If they like Steve’s quality work, they can send us their items. We will repair them, size them, restore them – whatever you need. We’ll also ship everything, fully insured, right back to you when they’re completed.”

Cindy and Steve consider customers to be part of their family, and strive to give them the quality and attention they deserve. This hard-working couple enjoys the opportunity to share exquisite jewelry and fine collectibles with a growing audience.

“We have something for everyone,” Cindy explains. “If we don’t have it, we’ll seek it out for you.”

At 25, she’s already done “Dancing With the Stars” and written a memoir. Next up: tiny white sapphires.

Bethany Mota, the video blogger whose chatty posts about makeup and clothing have attracted nearly 10 million subscribers to her namesake YouTube channel, is adding another profession to an already long résumé: designer of demi-fine jewelry.

Ms. Mota, 25, is the founder and co-designer of Atom&Matter, a line of delicate jewelry going on sale Nov. 17 that is made of recycled silver, covered in gold vermeil or coated in rhodium, and sometimes embellished with tiny white sapphires.

With prices ranging from $48 for tiny stud earrings and a slim ring to $239 for a chain of paper clip-shaped links, the line seems aimed at shoppers like Ms. Mota — young women who are looking for something that is more of a keepsake than a fast-fashion purchase and are willing to spend a bit more than they might have in their tweens and teens.

“I wanted to do something in this space because jewelry has always meant a lot to me,” she said in a phone interview in her airy San Fernando Valley home in California, where she also frequently records YouTube footage while sitting on the edge of her bed or cooking in the kitchen.

“It usually is a representation of something from your life or something special that someone gave you,” she said. As examples, she cited a pair of heart-shaped lockets that she and her sister received years ago as holiday gifts from their parents and a silver pendant that she purchased for herself a few years ago to wear, as she put it, as “a symbol of personal growth and transformation.”

Atom&Matter’s first offerings, from what is called the Galaxy Collection, include about two dozen items, each adorned with a star. It is the type of jewelry that lends itself to layering and wearing every day. “I compare it to tattoos because I feel like it’s similar in that it usually represents something and means something and you wear it all the time,” she said.

The pieces seem especially designed for life at home in a sweatshirt, just as Ms. Mota has been seen in several recent YouTube posts. “In this time of sitting on Zoom all day, there are only a few things that are visible to your audience,” said Beth Goldstein, an analyst for the NPD Group, a market research company. “Jewelry is one of them. That’s why, especially coming into holiday, jewelry is a big opportunity.”

To codesign the collection, Ms. Mota worked with Yunjo Lee, who spent several years at Tiffany & Co., until her departure in 2014. Ms. Lee’s collaborators at that luxury jeweler were decidedly different — she said she worked closely with Frank Gehry and Paloma Picasso, for example — but she stressed that Ms. Mota had been a valuable partner.

“She’s much younger than any other people that I’ve worked with,” Ms. Lee said, “but she’s not any less inspiring or any less influential.”

Ms. Mota has done more than just blog since she began posting on YouTube in 2009, initially on a channel she called Macbarbie07. In 2014, for example, she competed on “Dancing With the Stars” (she and her partner, Derek Hough, finished fourth); she’s released music on YouTube and is planning to put out more. Her book was published in 2017, a hybrid memoir and self-help manual titled, with a play on Ms. Mota’s name, “Make Your Mind Up: My Guide to Finding Your Own Style, Life and Motavation!”

Strictly speaking, she has designed jewelry before: She worked on several collections of clothing and accessories as part of a collaboration with Aéropostale that was introduced in 2013. The jewelry in those lines included a $6 pendant with the word “love” in script and a $9 large faux pearl-studded bow on a chain.

“For what it is,” she said during the recent interview, “that jewelry is great and I think jewelry at that price point is also really great.”

But for pieces that will be worn often and kept for a long time, she said, “it just makes sense to spend a little bit more to get the extra quality.”

Of course Ms. Mota is not the only YouTuber with her own jewelry line. Hannah Meloche, with almost two million YouTube subscribers, offers jewelry on her website Starlite Village, including a $12 pendant with a charm that resembles a takeout coffee cup. Amanda Steele and Jenn Im, both of whom also have substantial followings on YouTube, have had jewelry lines as well.

But Ms. Mota says she is eager to reach an audience beyond her followers. “Even people that don’t watch me or know who I am, I want this to also appeal to them,” she said.

That explains, in part, why the line is not called, say, Bethany Mota Jewelry. While Ms. Mota is pictured wearing the jewelry on atommatter.com — the website that is to be the brand’s initial point of sale — the site’s breezy images present her more as a model than a designer and spokeswoman.

And the name, she said, represents “something that we all have in common as humans” — although, she added, “coincidentally, atom is my last name backwards.”

Hannah Stephens, Atom&Matter’s chief executive, said, “Obviously Bethany is the face of the brand as we launch, but we’re really confident in what we’re building as a product and a company as a whole.” She added that future collaborations with other influencers were a possibility, and physical pop-up stores when coronavirus restrictions begin to subside.

That strategy might serve the brand well, since Ms. Mota’s celebrity won’t guarantee its success — especially with her first young followers now in college or the work force.

Ms. Mota’s name and image “obviously will help with the awareness, in part, but the products have got to be great,” said Ms. Goldstein of NPD. “It’s got to check the boxes, because if consumers don’t think that it’s a good fit or it’s not authentic and she’s just doing it because she wants to have a line, like many celebrities, maybe it will have an initial bump but it may fizzle out after that.”

Ms. Mota says she is prepared for comments and potential criticism as the brand, which she has worked on for about a year, hits the market. “That’s part of the process,” she said. “I think that it’s very crucial to starting a brand and starting anything new.”

“I’m excited to hear whatever feedback people have,” she said, with a slight giggle, “even if it’s constructive.”

Swiss watch and jewellery house Piaget, founded in 1874 as a factory for the manufacturing of watch movements and components, traditionally has not been left out of the events of the Paris Haute Couture Week. During the first week of July, the Maison showcased its new high jewellery collection entitled “Sunlight Escape”. The collection pays tribute to the sun in all its glittering glory and incredible nordic landscapes, embodying the admiration of nature and boundless freedom.  These are jewels for the impetuous, secular appearance, bold, exciting, exceptional items. The “Sunlight Escape” collection consists mainly of three parts: Warming Lights, Exalting Sights, Dancing Nights. Continue reading →

In an industry predominantly ruled by male designers, Suzanne Syz is a rare gem among the few female designers creating jewellery today. Suzanne Syz is a key figure on Geneva’s jewelry scene who has been dressing women with her precious finery about 15 years. Her sparkling creations crafted with enormous finesse and skill reflect Suzanne Syz’s intense fascination for the contemporary art she collects. Continue reading →

The new high jewellery collection “Sunlight Journey” by Piagetis undoubtedly bright and original. It is the fourth sun-inspired jewellery line, following “Mediterranean Garden“, “Secrets&Lights“, “Sunny Side of Life“. Radiant and vivid colors look richly and elegant, and never leave a sensation of bijouterie.
The main idea of the collection is surely the Mediterranean sea: sea azure, pink gold of sunset, pine color of grass, sky, the all-encompassing feeling of joy of life and enjoyment every moment, for which we all love Italy. Continue reading →

Is kontakt 6 worth it