Unlike most of the morning show television programs broadcast from New York City, Fox and Friends does not have a live studio audience, either in the studio or on the street. The show is shot at Fox Studios in its brand new state of the art studios, constructed at the corner of 48th and Sixth Avenue in the heart of Rockefeller Center. The new studio has a giant news ticker running on the outside of the building, broadcasting the latest news to passersby. Studio D, where Huckabee is filmed has room and includes a studio audience, but Studio E, home of Fox and Friends, does not. Oddly though, the sofa upon which the hosts sit, is in front of a window where the silhouettes of passersby are easily seen. In spite of the lack of a studio audience, the show does feature certain human interest segments, like cooking, lifestyle and relationships. However the cooking is done for the hosts by a celebrity chef and only seen by the viewing audience at home. During the summer months, the outdoor space is utilized by the All American Concert Series for famous musical acts from the heartland that are more likely to appeal to their viewers. It is a surprise that this show is not shot in a more appropriate locale such as Houston, Texas or Oklahoma City, where most of the shows viewers reside.

The show is a combination of news, weather, interviews, and human interest stories, as well as occasional segments for entertainment and cooking. It is currently ranked number one among cable morning news shows. The show began in 1998 as Fox X-Press. After 9/11, an additional hour entitled Fox and Friends First was added to the show. Eventually, the entire three hour show settled on the Fox and Friends title. Although the accuracy of the news may be sub par, no one can complain about production values, which are very high.

The show is well funded by Fox News. Everything from the set to the computer graphics are top notch, giving the program a sleek, modern look. That being said, Fox and Friends have suffered from news accuracy problems and has been questioned as a credible news source on many occasions. The TV audience for Fox and Friends does not seem to mind about the news accuracy issues and continues to remain loyal to the show. With the addition of Hasselbeck and the new "curvy couch," Fox and Friends scored a home run with their demographic. The show's target audience is: Middle America, non-college educated republican leaning viewers. To that demographic, the show is a cheery, morning news show. To the other parts of the demographic spectrum, the show is a source of mildly entertaining news but with some concerning accuracy flaws. Moreover, Fox and Friends has been accused by liberal pundits of often being politically incorrect, ignorant, racist, borderline sexist and providing news misinformation.

The show does, however, provide a counter to the often liberal media that exists on the other television channels. Fox and Friends has made no bones about its aspirations about wanting to become the number one broadcast network morning show on the Fox Network TV channel (channel 5 in NYC). This would replace the existing show in that slot, Good Day New York with Rosanna Scotto, Greg Kelly and Mike Woods. With Fox and Friends viewership numbers increasing year over year, there is a distinct possibility that they might just pull that off.

James Marshall was born in San Antonio, Texas, and grew up sixteen miles outside of the town on the family farm. On a fateful summer afternoon in 1971 James Marshall lay on his hammock drawing pictures. His mother was inside the house watching Who's Afraid of Virginia Wolf on TV. The strident voices of the movie's protagonists, George and Martha, split the quiet air, and as the sketches began to take shape, history was made... and James Marshall became one of the most prolific and successful author/illustrators of children's books.

He is best known for his series on the mischievous exploits of Fox, a debonair, lazy showoff; the uproarious adventures of the two Cut-Ups, Spud and Joe; George and Martha; and the misadventures of the Stupid family. The Washington Post said in a review of his work, "There are few better writers and illustrators for children now than Marshall. Certainly there is no one else working today who more successfully captures the child's point of view than does the creator of George and Martha and the Stupids." The New York Times said about the Fox books: "The miracle of Mr. Marshall's work is that so often his stories are as profound as they are simple." He illustrated new versions of many children's classics, including Goldilocks and the Three Bears, for which he received a Caldecott Honor, Red Riding Hood, The Three Little Pigs, and Hansel and Gretel.

Ahead of Indigenous Peoples Day, Last Week Tonight With John Oliver mocked Fox & Friends host Brian Kilmeade who can’t help but discuss his love of Christopher Columbus any chance he gets while on the air. 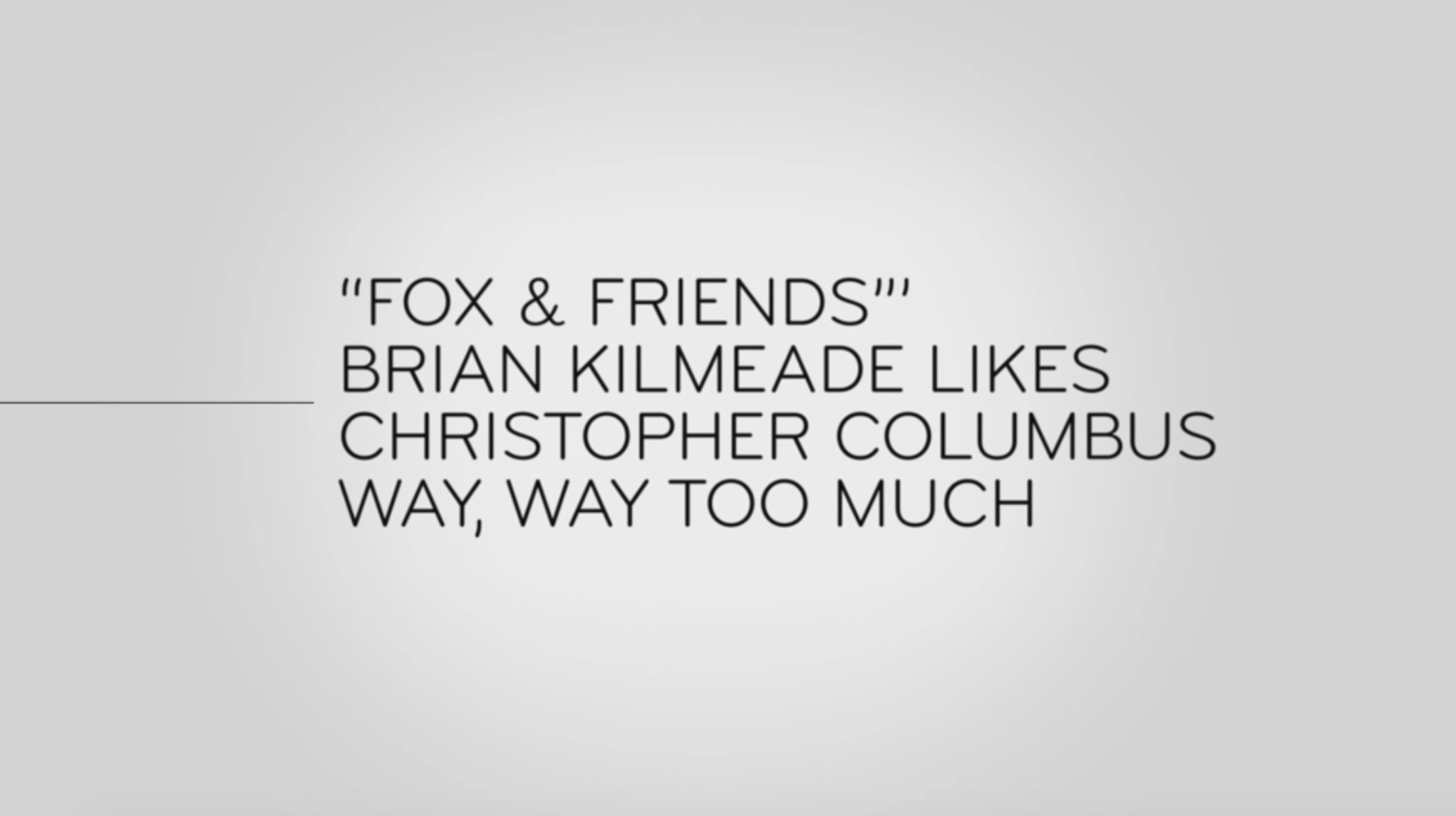 The popular HBO late-night series aired clips of Kilmeade praising the Italian explorer for discovering the Americas, an area that was already inhabited by natives.

“If you read one reputable book on Columbus, and still don’t think we should have a Columbus Day, you’re not paying attention,” he said in one such clip.

President Joe Biden declared October 11 as Indigenous Peoples’ Day—the same day as Columbus Day— with a proclamation last week in support of Native Americans that was met with resistance.

He said, “Today, we also acknowledge the painful history of wrongs and atrocities that many European explorers inflicted on Tribal Nations and Indigenous communities,” Biden wrote. “It is a measure of our greatness as a Nation that we do not seek to bury these shameful episodes of our past — that we face them honestly, we bring them to the light, and we do all we can to address them.”

Adding, “For Native Americans, western exploration ushered in a wave of devastation:  violence perpetrated against Native communities, displacement and theft of Tribal homelands, the introduction and spread of disease, and more.  On this day, we recognize this painful past and recommit ourselves to investing in Native communities, upholding our solemn and sacred commitments to Tribal sovereignty, and pursuing a brighter future centered on dignity, respect, justice, and opportunity for all people.”

For the 1975 German film, see Fox and His Friends.

It begins at 6:00 a.m. Eastern Time Zone with the latest Fox News Live headlines and news of the morning and continues with a variety of segments including current events, interviews, updates of news stories with correspondents, political analysis from the hosts, and entertainment segments.[6][7]

Fox and Friends is known for being favorable of the Republican Party and President Donald Trump, while expressing dislike for the Democrat Party.

After the September 11 attacks, an additional hour was added to the beginning of the weekday show, but branded as a separate show called Fox & Friends First. It was the first Fox News show to air live for the day, starting at 6:00 a.m. It was discontinued on July 13, 2008, and replaced with an additional hour of Fox & Friends.[8] The Fox & Friends First title was reintroduced on March 5, 2012, also as a separate show airing one hour before the main three-hour program, but using a separate slate of rotating anchors.[9]

Fox & Friends has been described as being more akin to the Big Three television networks than its cable competitors (particularly CNN's New Day and MSNBC's Morning Joe), with a mix of news, entertainment and lifestyle-oriented segments, and a generally casual presentation. However, as with the morning shows on competing cable news channels, its news content largely concentrates on politics. Currently, Steve Doocy, Ainsley Earhardt, and Brian Kilmeade co-host the program Monday-Friday. Will Cain, Rachel Campos-Duffy and Pete Hegseth co-host on the weekends.[10][11]

The New York Times has reported the show is one of the most successful on the network.[15] After the arrival of Elisabeth Hasselbeck in September 2013, the show climbed 23 percent in total viewers compared to its average for the third quarter of 2013, and 22 percent in the key 25–54 news demo. For Hasselbeck's first four weeks on the show, Fox & Friends averaged 1.226 million total viewers, up from the 1.058 that the show averaged for the third quarter of the year.[16][17]

In February 2017, the program's average ratings increased to around 1.7 million viewers, fueled by the recent inauguration of Republican candidate Donald Trump as president.[18]

In 2012, The New York Times wrote that Fox & Friends "has become a powerful platform for some of the most strident attacks on President Obama."[15] The program has provided a platform for Barack Obama religion conspiracy theories and, in May 2012, aired a 4-minute video attacking Obama's record as President.[15] The video was widely criticized as a political attack ad masquerading as journalism;[19][20]Time magazine television critic James Poniewozik wrote: "It's hard to imagine a more over-the-top parody of Fox News raw-meat-hurling, fear-stoking, base-pleasing agitprop."[21] In response, a Fox News executive vice-president 'disavowed' the video, blaming an associate producer and that the video 'slipped by' senior managers at the network.[22] Fox News stated that the show was entertainment and "does not pretend to be straight news."[15]

Former U.S. president Donald Trump is a regular viewer of Fox & Friends, and praised the program for its favorable coverage of his presidency. Critics noted that Trump often "live-tweets" about stories featured on Fox & Friends as they air—which created a "feedback loop" when the stories are acknowledged as national issues because they were discussed by Trump on social media.[23][24][25][26][27][28]

Trump was a frequent guest on Fox & Friends before his presidency. In 2018, Fox News announced that he would appear on the show to offer commentary every Monday.[29]

On April 26, 2018, Trump was interviewed by phone on Fox & Friends in a segment that stretched to nearly half an hour, and discussed several recent topics and controversies surrounding himself and his government.[30][31] Trump said that he might interfere with the Special Counsel investigation,[32] acknowledged that lawyer Michael Cohen had represented Trump in the Stormy Daniels–Donald Trump scandal,[33] and said that he had gotten a card and flowers for Melania Trump, his wife, whose birthday was the same day.[34]