LIGHT
UP YOUR COMPUTER'S
PERFORMANCE

The solid upgrade you can depend on.

OK, let’s face it, read and write speeds of SSD modules are getting ridiculous. Just a few weeks ago at CES 2020, we were able to see what PCIe Gen 4 is capable to deliver. We saw transfer speeds way over 5000MB/s (sequential read/write) and that is just the beginning. For many of us who still using PCIe Gen 3 motherboard, we can still get great performance out of the NVME SSD modules from companies such as Patriot Memory. Patriot Viper VPR100 is a Gen3 x4 NVME 1.3 Solid State Drive with great features such as blazing read and write speeds with a touch of RGB. Viper VPR100 comes in 256, 512GB, 1 and 2TB modules. So it is easy to get what you need and not to worry about performance. VPR100 is strongly oriented toward the gaming community who appreciates RGB. With Viper VPR100 Patriot introduces the world’s first RGB APP for M.2 PCIe SSD.

You Can Rate This!0 Votes

Pros: -The lighting is crisp, and easily customizable through any of the standard lighting programs from MSI/ASUS/GIG OR -It has lightning fast and solid speeds beating a lot of other M.2's that I've seen... BUT

Cons: -You can't have both pro's at the same time... If the lights are enabled the controller gets overloaded and drops the speeds to about 2x a standard sata SSD still fast, but nowhere near the top end of this device and in fact is closer to 1/3rd of it's rated speeds. (with RGB enabled it clocked at 900MBps sequential read, with RGB disabled it clocked 3200MBps) In Patriots defense they do state that the speeds can be impacted with the RGB enable however their statements mention a 30% reduction in performance where as I've measured a 70% reduction.

Overall Review: My overall impression with the product however is good, I very much liked the RGB lighting when I had it enabled, though I far prefer the blazing fast speeds I get with them turned off. So my basic suggestion would be that if your main desire is to have and SSD with beautiful RGB lighting then this is the SSD for you. If however your goal is to have a super fast M.2 that boots your computer in 3 seconds flat, this also will do that... but there are better price/performance options available on the market that won't have a bunch of disabled LED lights attached. -As for suggestions to Patriot, my best guess for the performance differences is that either the HD's controller is also being tasked with the control of the RGB lighting, which is slowing down it's interactions with the cells. In which case come one guys, don't be cheap and spring for a dedicated RGB controller. Or if the problem is as I actually suspect and that the PCIx4 slot doesn't deliver enough power to both power the LED's and run the SSD at spec then just slap a power adapter on there and call it a day. I'd rather have a little wire sticking out of my awesome lit up SSD that runs at blazing speeds, than have to choose 1 or the other.

Today we will be looking at the Patriot Viper VPR100 PCIe 3.0 x4 NVMe M.2 RGB SSD. This drive features the Phison E12 controller and has been paired with Toshiba 3D TLC NAND Flash memory to deliver sequential speeds of up to 3,300 MB/s read and 2,900 MB/s write. With regards to Random 4K performance you are looking at up to 700,000 IOPS Read and 650,000 IOPS Write. Impressive numbers, but those impressive performance numbers are not what make this M.2 storage drive special. 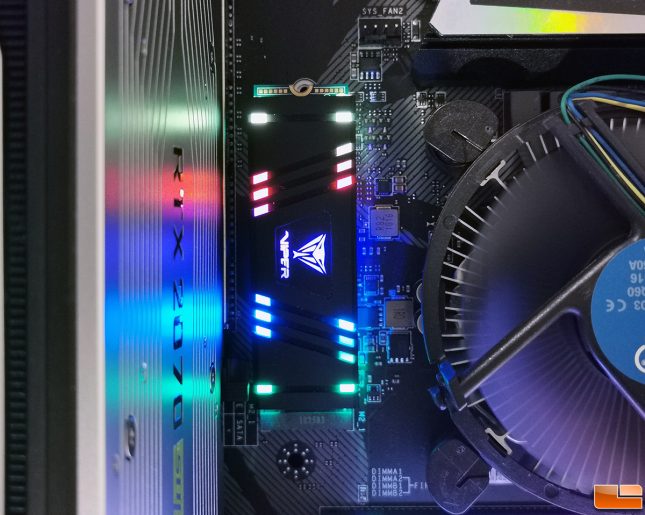 This drive is one of only a handful of M.2 2280 drives on the market with RGB lighting and it is the first that comes with the RGB APP Sync software for controlling the lighting effects! 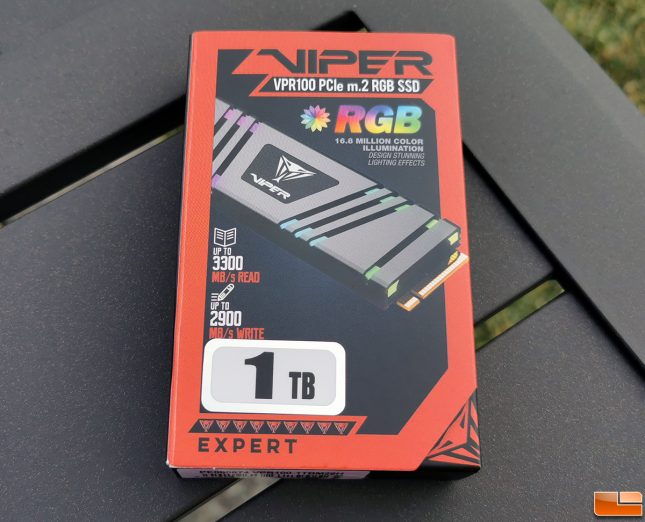 The VRR100 series is available in four capacities ranging from 256GB all the way up to a 2TB capacity drive for those looking to have plenty of storage space. The performance, amount of DRAM cache and endurance rating differs on each drive, so we made a quick table to show our readers the key differences between each of the capacities. All of the Patriot Viper VPR100 series drives are backed by a 5-year warranty.

Patriot sent over the VPR100 1TB drive for us to review and that makes sense as it has the the highest performance ratings and costs less than the larger 2TB model.

Patriot is using the M.2 2280 ‘gum stick’ form factor for the VPR100 series and this is a double-sided drive with a large heat spreader on the top. Clearly this drive is not aimed at laptop users due to the RGB lighting, but the double-sided nature and heatsink will ensure that.

When it comes to controlling the RGB lights on the VPR100 drives you can use the Patriot Viper RGB APP software. 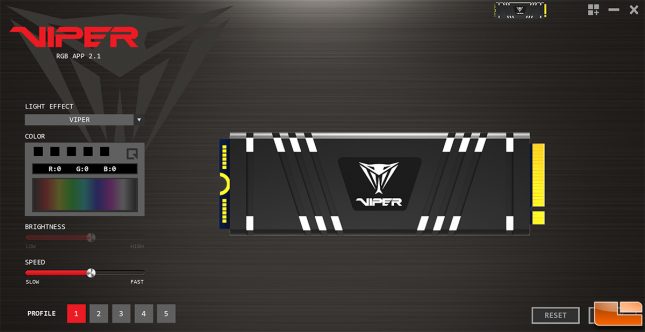 It includes 8 built-in light effects and it also allows you to change the color for the five lighting zones as well as the brightness and speed of the effects. The app is pretty basic, but it gets the job done. You can also use your motherboards RGB software to control the lights. So, if you are familiar with MSI Mystic Lighting, ASUS AURA sync, ASRock Polychrome Sync or Gigabyte RGB Fusion you are set. 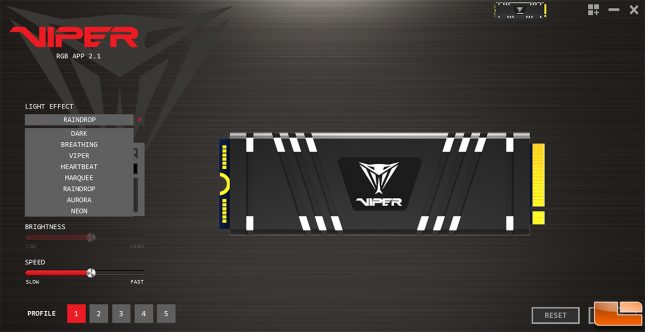 When we were playing around with the RGB lighting we noticed that enabling RGB Sync could possibly slow down the VPR100 series performance by as much as 30 percent! The fine print on the website noted that this slowdown depended on the RGB mode selected. 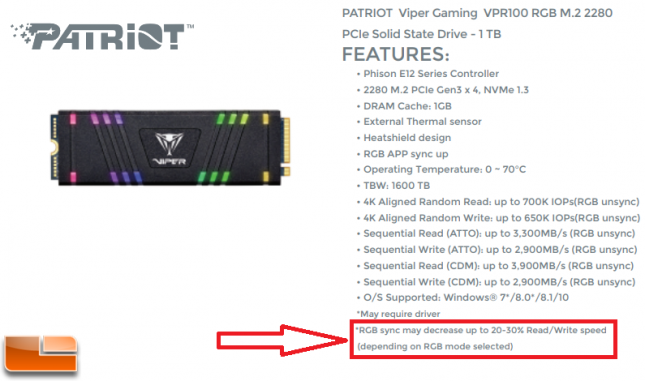 So, we started looking at performance with and without RGB enabled and noticed no performance difference on our test system with the Patriot Viper RGB App. We ran AIDA64’s linear read test while enabling various lighting modes and saw no difference whatsoever.

We then wondered if thermal throttling was causing the performance drop, so we started looking at thermals. The Viper VPR100 with the RGB off was sitting around 28C as the primary drive on our test bench. Enabling RGB with all the lights set to white at the highest brightness took the temps up from 28C to 38C at idle. This is a big jump, but far from throttling or causing any performance impact. We then wrote a 30GB Blu-Ray movie to the drive and that got temperatures up to 54C. So, it isn’t a temperature issue… We reached out to Patriot and let them know we weren’t comfortable reviewing this drive unless we were able to duplicate the performance impact of enabling RGB and was sent the following slide. 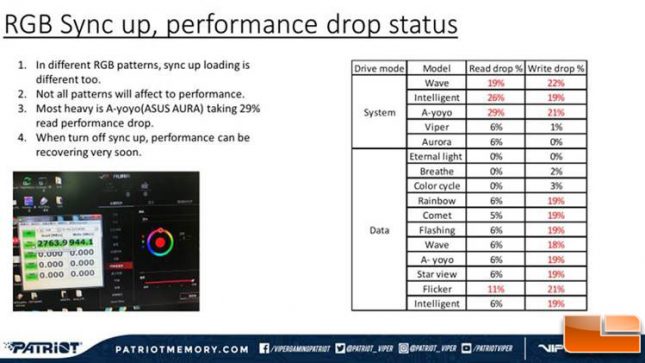 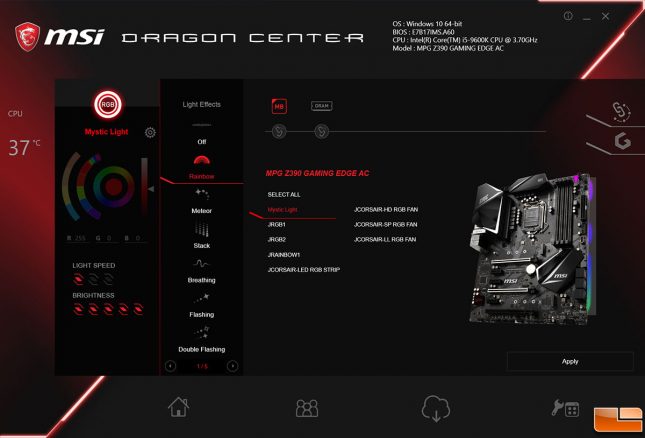 We use the MSI MPG Z390 Gaming Edge AC as our SSD test platform and the Viper VPR100 is not detected by the latest version of Mystic Light. 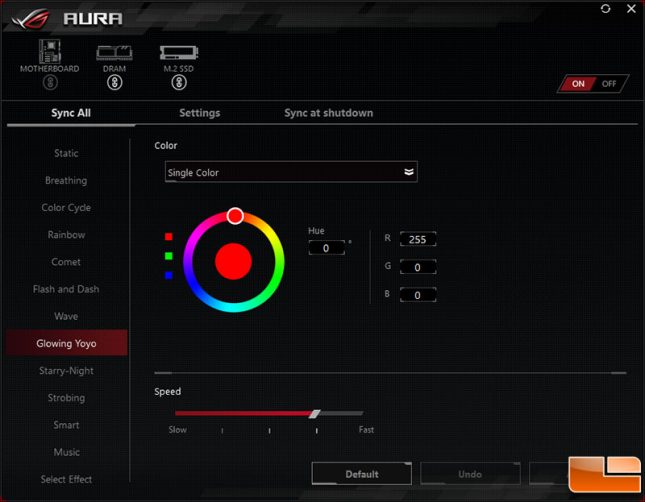 So, we switched over to an ASUS Ryzen platform and found that ASUS AURA Sync software did detect the Viper VPR100 1TB SSD as a secondary drive. We could also apply the standard lighting effects without issues.

That all said, let’s take a look at some benchmark numbers on our test system with the RGB turned off.