If your Honda vehicle has stored a code P1298, it means that the powertrain control module (PCM) has detected a problem with part of the charging system known as the electronic load detector (ELD) or ELD circuit. This code specifically pertains to a condition in which a voltage signal that is higher than anticipated has been perceived. In my experience, only Honda vehicles utilize this type of ELD device or code P1298. 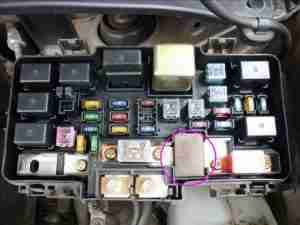 The ELD is a small current transformer that is located in the underhood fuse and relay box. It could be easily confused with some type of fuse but it actually detects the degree of voltage (current) which is being pulled from the battery and charging system. The PCM regulates the amount of voltage applied to the alternator field coil in accordance with the signal received from the ELD. This allows the voltage output of the alternator to fluctuate in order to meet varying load requirements.

When factory accessories are in use (especially lighting and air conditioning), alternator output must be near the maximum level of 14.4-volts. When these accessories are not in use, alternator output needs to drop to near minimum (usually 12.1-volts) in order to conserve fuel and maximize alternator longevity. After all, if the alternator is producing maximum output constantly, it is not going to last for very long and it will place an increased load on the engine.

If the PCM detects a voltage signal from the ELD circuit that is greater than the degree of voltage it expected the alternator to produce at a given time and under a specific set of circumstances, a code P1298 will be stored and a malfunction indicator lamp (MIL) may be illuminated.

What are the common causes of code P1298?

How do you troubleshoot code P1298?

I try to have a diagnostic scanner, a digital volt/ohmmeter, and a reliable vehicle information source like All Data (DIY) on hand when diagnosing a code P1298.

It is very likely that the symptoms which the vehicle in question is exhibiting, as well as the stored code P1298, are the subject of a factory technical service bulletin (TSB). The ELD used in Honda vehicles has demonstrated a proclivity for failure. Use your vehicle information source to search the TSB index for one that matches the vehicle in question, as well as the symptoms and code presented. The information contained therein may prove helpful in your diagnosis.

Carefully inspect the alternator and battery as well as all wiring and connectors associated with the starting/charging system. Repair or replace any corroded or damaged components before proceeding with your diagnosis.

Connect the scanner to the vehicle diagnostic connector and retrieve stored codes and freeze frame data. Write it down as it will almost always come in handy if the diagnosis drags on due to an intermittent condition. Clear the codes and operate the vehicle under various electrical load conditions to see if the code P1298 is reset.

Observe the data display on the scanner while using the DVOM to test live voltage data at the alternator. If the voltage output signal displayed on the scanner is higher than what is reflected by the voltage display on the DVOM, suspect a defective ELD. In some cases, replacement of the ELD will require removal of the entire fuse box. Consult your vehicle information source to obtain the correct ELD replacement procedure for the vehicle in question. 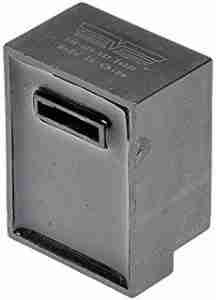 Alternator failure will rarely result in a high voltage condition at the ELD but follow the guidelines set forth in the vehicle information source and corresponding TSB/s for diagnosing and repairing charging system malfunctions for the specific vehicle in question.

Other Manufacturer Specific Definitions for P1298

Honda vehicles are equipped with an electric load detector (ELD) 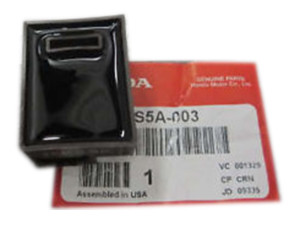 that measures the load on the charging system and can set a P1298 ELD circuit voltage high when there’s a problem. The ELD sends a signal to the ECM which controls the voltage regulator and adjusts field coil voltage to match the load. The ELD reduces field coil voltage during low load periods to increase fuel economy.

On May 6, 2005 Honda issued a service bulletin #05-006 to address the issue a P1298 ELD circuit voltage high trouble code. The service bulletin advises that Honda has discovered a faulty solder joint on the ELD and recommends replacement with an updated part #38255-S5A-003, H/C 7987571.

1) Reset the ECM. Then start the engine and turn on the headlights. If the ELD circuit high voltage does not set, the problem is intermittent.

2) To test the ELD, disconnect the electrical connector. Then check for continuity between terminal #1 and ground. If no continuity, there’s an open between the ELD and ground.

4) Start engine and allow it to idle. Check voltage between ECM terminals A9 and D16. Then turn on headlights. If the voltage does NOT drop, replace the ELD. If voltage does drop, the problem is in the ECM.

The P1298 ELD circuit high voltage exits in these vehicles:

Repair Difficulty Level: 2/3  What is this?

What does this mean?

Start by checking the "Possible Causes" listed above. Visually inspect the related wiring harness and connectors. Check for damaged components and look for broken, bent, pushed out, or corroded connector's pins.

|What is the cost to diagnose the P1298 HONDA code

The cost to diagnose the P1298 HONDA code is 1.0 hour of labor. The auto repair's diagnosis time and labor rates vary by location, vehicle's make and model, and even your engine type. Most auto repair shops charge between $75 and $150 per hour.

The Electric Load Detector (ELD) measures the main current flow and sends that signal to the Engine Control Module (ECM) to command the alternator charging system to get fuel efficiency and decrease the drag of the engine when starting.

Need more information on how to fix the P1298 HONDA code?
Get Access to Factory Service Manuals

This error code is a manufacturer-specific trouble code, meaning it does not appear to all vehicle makes and models with OBD-II system or vehicles made since 1996 up to present. Rather, it applies to select vehicle manufacturers, most commonly among Honda vehicles like Honda Accord, Honda Civic, and Honda CR-V. Other manufacturers with the same error code may have different specifications on the definition, troubleshooting, and repairs for this code.

The Electric Load Detector works by monitoring the amount of current that the charging system is using, so it can determine how much voltage needed to charge the battery. If the voltage input is too high, it signals the PCM that something is not right with the ELD, activating the Check Engine light and registering the code in the process.

As with other error codes, this code sets the Check Engine light and registers the error code. Usually, there are no other noticeable symptoms. In some cases, however, the engine may suffer rough idle, especially when the vehicle settles down or transitions from high throttle to rest, or the engine feels like it’s misfiring.

There are multiple reasons for this code to appear, some of the most common causes include:

The first thing you can do to diagnose this problem is to reset the PCM. Pull the number 6 fuse for 10 seconds and then put it back in. Then, start the engine and turn on the headlights, check for the same code. If the code is not thee, that means you have an intermittent failure. Next, check the connections at the ELD.

If the code comes back, turn the off both the headlights and the ignition. Disconnect the ELD 3P connector, which is located behind or underneath the under hood fuse box.

Next, turn on the ignition and measure the voltage between the ground and the ELD 3P connector through the terminal no. 1. It’s the black/orange wire. Backprobe that on the harness connector.

If there is no battery voltage, then check the no. 4 fuse. If the fuse is ok, repair the open in the wire between no. 4 fuse and ELD.

If there is a battery voltage, turn off the ignition and then connect the ELD 3P connector terminal no. 3 to the body ground with a jumper wire. No. 3 terminal is the green/red wire. Again, back probe that with a pine and connect the jumper wire the pin.

If you don’t see continuity, then repair open wires between the ELD and the ECM E15.

If there is continuity, check for continuity between the ELD 3P connector terminal no. 2 and body ground. It’s the black wire.

If there is no continuity, repair open wires between the G201 which is ground connection and the ELD.

If there is continuity, reconnect the ELD connector as well as the PCM. Start the engine and allow it to idle.

As you measure the voltage between the PCM connector terminals A24 (brown/yellow wire) and E15 (green/red wire), make sure you turn the headlights on high. Check whether the voltage drops.

If the voltage does not drop, replace the ELD

If the voltage drops, then you need to update the PCM or replace it.

This error code is easy to repair, but of course, you need a thorough diagnosis as enumerated above. Some of the most common fixes are: