This article explains how to choose the best Nintendo DS for you.

The Nintendo DS is a popular and versatile handheld gaming machine. Several models are available, broadening its versatility to meet the needs of different gamers. But with so many incarnations of the Nintendo DS, how do you know which one is right for you, or for a gift recipient? Each Nintendo DS has its own charms, but if you're looking for particular hardware features, this guide might help narrow things down.

The Nintendo DS Lite, released in 2006, is Nintendo's most iconic version of the handheld, and the most successful. Its functions are identical to the original style Nintendo DS, but the Lite boasts a lighter, smaller body, and a brighter screen. The Nintendo DS Lite was discontinued in spring 2011, but you can still find it for sale from third parties.

The Nintendo DSi, released in 2009, plays the vast majority of the Nintendo DS library, but some new hardware features differentiate the DSi from the Nintendo DS Lite. The DSi has two cameras along with the built-in photo and music editing software. It also has an SD card slot and can play ACC format music files. Also, the Nintendo DSi can access the Nintendo DSi Shop, which has lots of downloadable games for sale.

Games that require accessories that plug into the Game Boy Advance cartridge slot are not playable on the Nintendo DSi.

The Nintendo DSi XL, released in 2010, is an upgrade to the Nintendo DSi that features larger, brighter screens with a wider viewing angle. The DSi XL also comes preloaded with software like "Brain Age Express" and "Flipnote Studio."

The Nintendo DS Lite is backward-compatible with the Game Boy Advance's extensive library. Combine that with the hundreds of titles available for the Nintendo DS itself, and you've got pure gaming goodness that will last you for ages.​

The Nintendo DSi Shop offers dozens of downloadable titles from small and independent game studios. Though downloadable games aren't often as big or flashy as what's available on retail shelves (they also don't come with the premium price tag of retail store games), they can be more daring and unafraid to push the gaming experience envelope. When a unique idea from an indie studio meets with critical acclaim, large studios often adapt those ideas to their big-budget titles.

Nintendo DS homebrew can help pad out your indie experience with great games by budding, though generally unlicensed, developers. You can even get your hands on some useful free apps.

There is a homebrew scene for the Nintendo DSi, but the Nintendo DS Lite is by far the go-to machine for homebrew, thanks to its community and for the accessibility and affordability of the required Slot-1 and Slot-2 cards.​

The Nintendo DSi is a little workhorse when it comes to multimedia content creation. With its cameras, photo editing software, the availability of Flipnote Studio, and its music editing app, the Nintendo DSi provides some great tools for creative types. The system's Wi-Fi connectivity and SD card slot also make it easy to upload and share masterpieces.​

Nintendo has worked hard to prove that video games can be for families, and its efforts have paid off. The Nintendo DS has a wide selection of family-oriented games that are playable on any version of the handheld, but the Nintendo DSi XL has big, bright screens with a very wide viewing angle. It's perfect for the kind of over-the-shoulder spectator gaming that can happen on long car trips, for example.​

The Nintendo DSi XL's wide viewing angle makes it great for those players who want to watch while they wait for their turns.

The original Nintendo DS is affectionately referred to as the "DS Phat" by fans.

Thanks for letting us know!

The Nintendo DS family is a family of handheld game consoles developed, manufactured, released, and marketed by Nintendo.

Initially released as an experimental platform ancillary to the then-current Game Boy Advance family, Nintendo DS soon replaced it as Nintendo's flagship handheld device family. The DS was distinguished from its predecessor by featuring a folding "clamshell" form factor and two screens—the lower screen being a touchscreen enabling input with an included stylus pen. It was also Nintendo's first handheld console to have built-in wireless capabilities, supporting both local communication between other DS consoles, and internet communications via the now-discontinued Nintendo Wi-Fi Connection service.

The line comprises three models: the original Nintendo DS; the Nintendo DS Lite, a streamlined version of the original model with brighter screens; and the Nintendo DSi, an enhanced iteration of the DS Lite with updated hardware, support for internal and removable storage, cameras, updated system software with photo and sound recording apps, the ability to download and purchase additional software via the DSiWarestore, and a larger Nintendo DSi XL model.

Throughout its lifetime, Sony's PlayStation Portable has been the main market competitor. The Nintendo DS line has been highly successful, continuing the trend of its predecessor, the Game Boy line. With over 154 million units sold worldwide, the DS models are the best-selling handheld consoles, and second best-selling console overall behind the PlayStation 2.

The DS line was officially superseded by the Nintendo 3DS family in 2011; the 3DS line carries similarities in functionality to the DSi, but with further enhancements to its internal hardware and software including autostereoscopic 3D display. 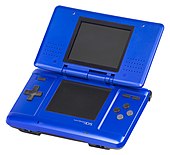 An Electric BlueNintendo DS in its opened position.

The Nintendo DS is a dual-screen handheld game console developed and released by Nintendo. The device went on sale in North America on November 21, 2004. The DS, short for "Developers' System" or "Dual Screen",[1] introduced distinctive new features to handheld gaming: an LCD screen working in tandem with a touchscreen, a built-in microphone, and support for wireless connectivity.[2] Both screens are encompassed within a clamshell design similar to the Game Boy Advance SP. Multiple DS consoles can directly interact with each other over short range peer Wi-Fi without the need to connect to a central wireless network. Alternatively, they could interact online using the now-discontinued Nintendo Wi-Fi Connection service.

Prior to its release, the Nintendo DS was marketed as a "third pillar" in Nintendo's console lineup, meant to complement the Game Boy Advance and GameCube. However, backward compatibility with Game Boy Advance titles and strong sales ultimately established the new handheld console as the successor to the Game Boy series.

A black Nintendo DS Lite in its opened position.

The Nintendo DS Lite is a dual-screen handheld game console developed and manufactured by Nintendo. It is a slimmer, brighter, and more lightweight redesign of the original Nintendo DS. It was announced on January 26, 2006, more than a month before its initial release in Japan on March 2, 2006 due to overwhelming demand for the original model. [3] It has been released in Australia, North America, Europe, New Zealand, Singapore, and defined regions in South America, the Middle East, and East Asia. As of December 31, 2013, shipments of the DS Lite have reached 93.86 million units worldwide, according to Nintendo. It was the final handheld to have backwards compatibility with Game Boy Advance games.[4]

A black Nintendo DSi in its opened position.

The Nintendo DSi is a dual-screen handheld game console released by Nintendo. The console launched in Japan on November 1, 2008, and worldwide beginning in April 2009. It is the third iteration of the Nintendo DS, and its primary market rival is Sony's PlayStation Portable (PSP). Development of the DSi began in late 2006, and the handheld was unveiled during an October 2008 Nintendo conference in Tokyo. Consumer demand convinced Nintendo to produce a slimmer handheld with larger screens than the DS Lite. Consequently, Nintendo removed the Game Boy Advance (GBA) cartridge slot to improve portability without sacrificing durability.

While the DSi's design is similar to that of the DS Lite, it features two digital cameras, supports internal and external content storage, and connects to an online store called the Nintendo DSi Shop (which was discontinued in 2017) . Nintendo stated that families often share DS and DS Lite consoles. Its new functionality was intended to facilitate personalization, so as to encourage each member of a household to purchase a DSi. The handheld supports exclusive physical media in addition to DS games with DSi-specific features and standard DS titles. The only exception to its backward compatibility are earlier DS games that required the GBA slot. As of September 30, 2014, Nintendo had sold 41.37 million DSi and DSi XL units combined.[4]

Reviews of the Nintendo DSi were generally positive; although IGN and bit-tech decried the console's lack of exclusive software and removal of the GBA cartridge slot, its added functionality caused many journalists to recommend it to those who had not purchased a previous DS model. Numerous critics were disappointed with the limited resolution of DSi's cameras, though others such as Ars Technica and GameSpot agreed they were adequate for the handheld's display. CNET and PCWorld considered the DSi Shop to be the most important buying incentive for current DS owners.

A burgundy Nintendo DSi XL in its opened position.

The Nintendo DSi XL (abbreviated to DSi XL) features larger screens, and a greater overall size, than the original DSi. It is the fourth and final DS model, the first to be available as a pure size variation.[5] Iwata said that cost restraints had, until then, limited the screen size and multiplayer aspects of portable game consoles, and that the DSi XL offers "an improved view angle on the screens", which makes it the first "portable system that can be enjoyed with people surrounding the gamer."[5] He argued that this introduces a new method of playing portable video games, wherein those "surrounding the game player can also join in one way or the other to the gameplay."[5] While the original DSi was specifically designed for individual use, Iwata suggested that DSi XL buyers give the console a "steady place on a table in the living room," so that it might be shared by multiple household members.[5]

The DSi XL is the longest, widest, brightest, and heaviest DS model.[6][7] The console features two 4.2-inch (110 mm) wide-viewing-angle LCD screens with the same resolution as the smaller model.[8] It has improved battery life over the DSi on all brightness settings; for example, batteries last 13–17 hours at the dimmest setting.[6] The handheld is outfitted with identical speakers contained in larger speaker enclosures, enabling them to produce louder sound. The hinges stop the screen at 120° in addition to the original DSi's position of 155° to allow easier table-top viewing.[9] The DSi XL is bundled with two longer styli, one of which is thicker, rounded, and pen-like, and does not fit inside the unit.[11]

There are several accessories released for the Nintendo DS family.

Legacy of the Nintendo DS

The Nintendo DS or simply, DS, is a 32-bit dual-screen handheld game console developed and released by Nintendo. The device went on sale in North America on November 21, 2004. The DS, short for "Developers' System" or "Dual Screen", introduced distinctive new features to handheld gaming: two LCD screens working in tandem (the bottom one featuring a touchscreen), a built-in microphone, and support for wireless connectivity. Both screens are encompassed within a clamshell design similar to the Game Boy Advance SP. The Nintendo DS also features the ability for multiple DS consoles to directly interact with each other over Wi-Fi within a short range without the need to connect to an existing wireless network. Alternatively, they could interact online using the now-closed Nintendo Wi-Fi Connection service. Its main competitor was Sony's PlayStation Portable as part of the seventh generation era.

We have collected a list of sources you can use to help locate refurbished, older, and used Nintendo products.

You may also want to try searching the Internet for companies that may have the product you are looking for. Good search words to use are: "nes hardware," "SNES hardware," "super nintendo," or "video game systems," along with the words "sale" or "sell." We suggest you research the company to ensure they are reputable before making a purchase.

Was this information helpful?