Your problem stems from the fact that when you rasterize a shape, using for example, you must determine the resolution of the raster, and it must be chosen in accordance to the "size" of your feature vectors if you want your raster to retain enough information.

If you do not want to lose too many details in the rasterization process, I guess a good rule of thumb would be to set the resolution to be lower than the typical size of your individual features. For example, if your features look like squares ~1km large, a "good" resolution would be in the 10-100m range. A way to programmatically get the typical size of your features would be to compute their for example: https://shapely.readthedocs.io/en/stable/manual.html#object.minimum_rotated_rectangle

The word ‘Geospatial’ indicates that data has some Geographic component to it. For us humans, it means the Earth’s surface, anywhere on the globe. It can be a city’s map, its street lines, junctions, or your address. This data comes with endless possibilities and once you get access to the Geospatial data, you can do mapping (of roads, canals, train routes, etc.), disaster management (flood / wild-fire damage estimation, etc.), and much more.

In this blog, we will introduce you to the basics of common Geospatial data formats. We will also look at some Python modules that can help you in getting started with Geospatial data.

Represents data as a cell or a grid matrix. E.g., jpeg, GeoTiff, etc.

In this blog, we will cover some basic modules to read, process and visualize the aforementioned data formats

GeoJSON is simply a JSON file, which conforms to the community-defined standards (https://geojson.org/). Although we can simply use JSON module to read its content, we will use GeoPandas, which supports loading of shapefiles in a similar manner:

A vector data format supports the following types of geometries:

*You can load a shapefile (.shp file) with the same syntax, you will see a similar data frame. We will be working with Philadelphia datasets

GeoPandas automatically extracts the Coordinate Reference System for your data and is available as the data frame attribute crs. 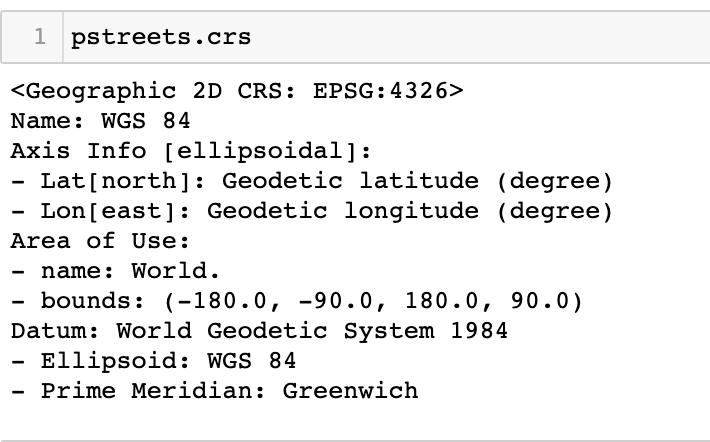 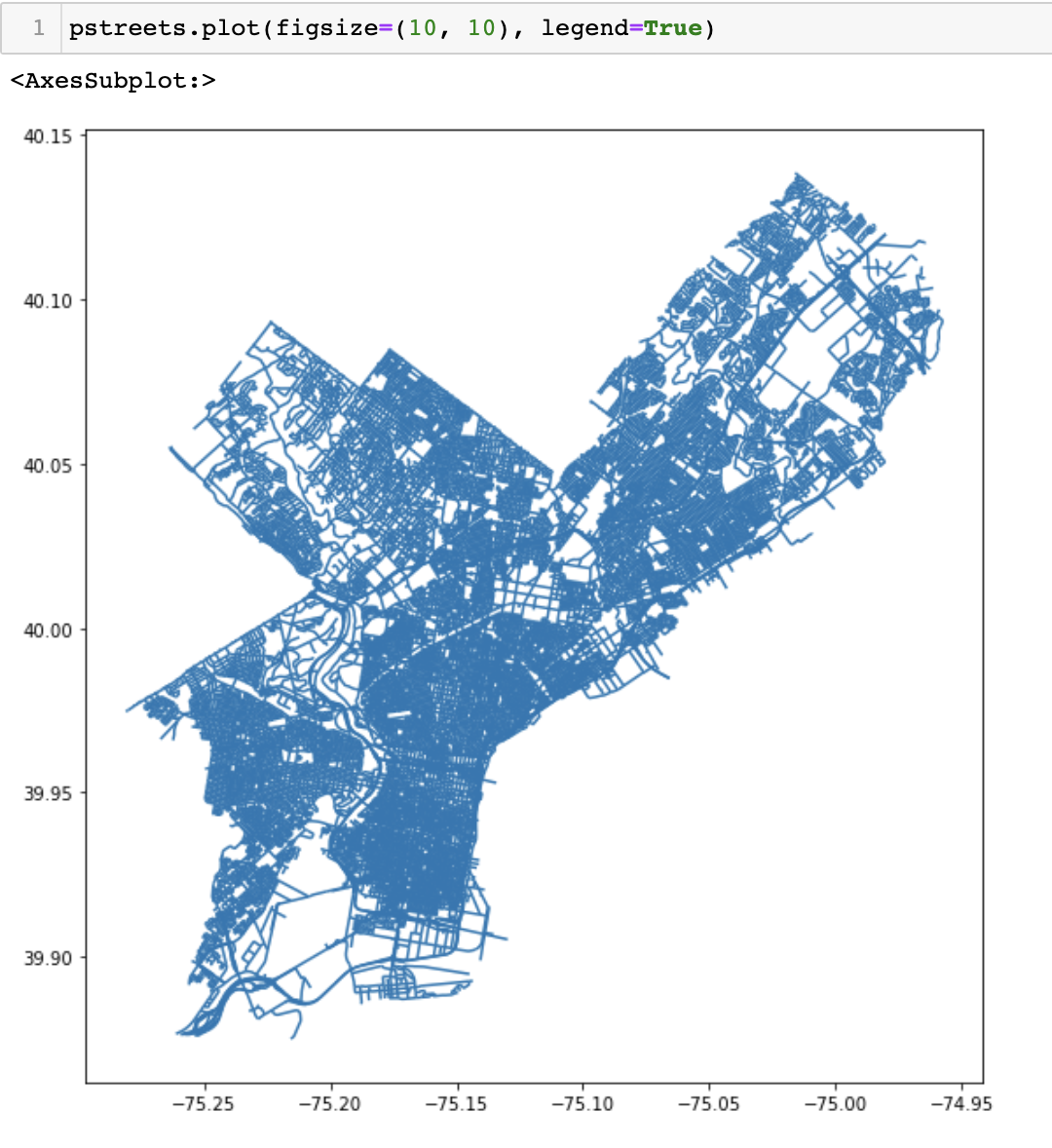 In itself, the plot might not make much sense. So let’s plot it on the World Map. For this, we will need to convert our data to EPSG:3857, Spherical Mercator projection coordinate system. 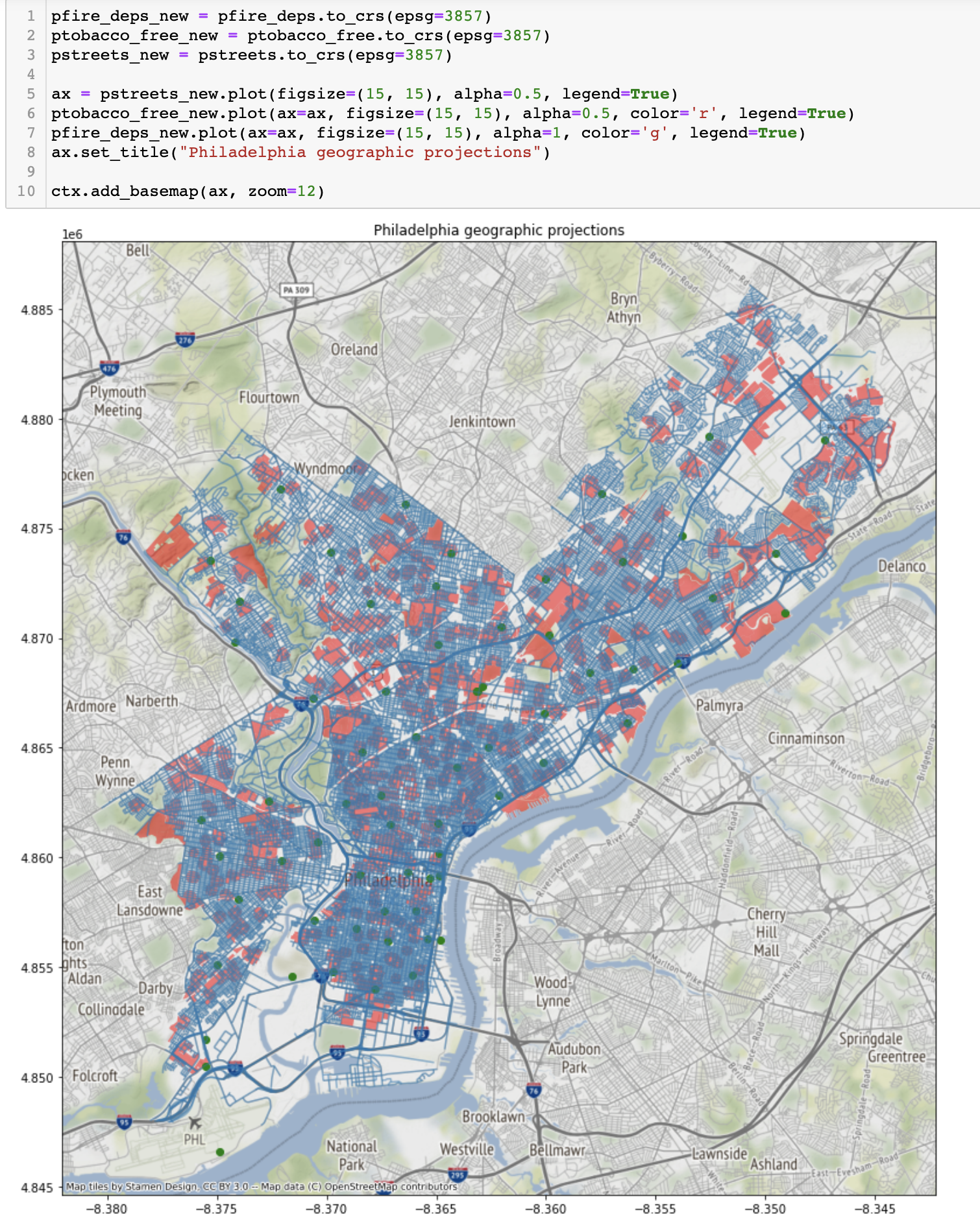 Geospatial data in raster format comes in GeoTiff files. We can use the Rasterio module to load these files in Python. 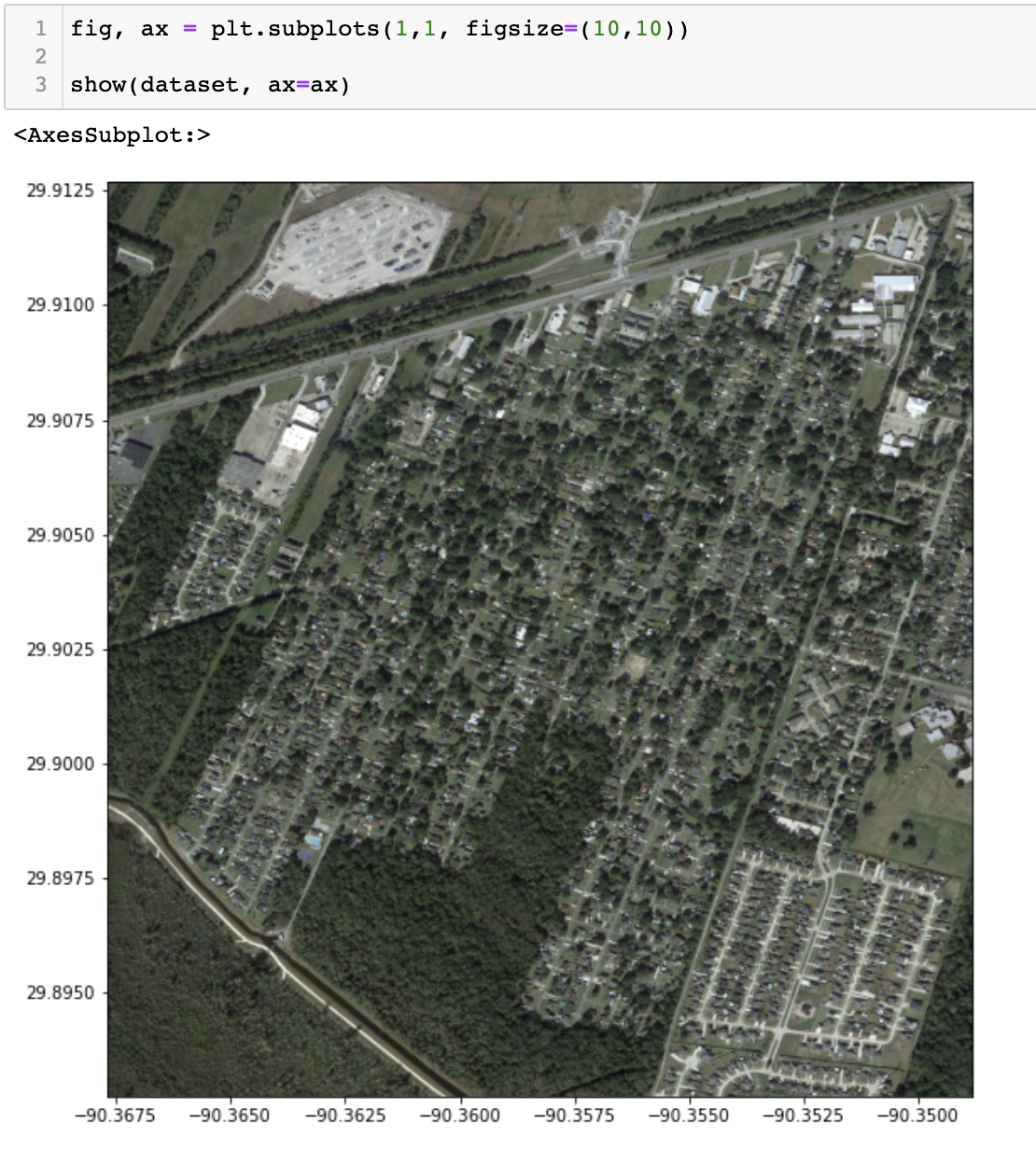 If you want to transform the raster more freely, you can simply convert the raster into a NumPy array with 4 channels:

Sours: https://www.aidash.com/resource/understanding-basics-geospatial-data-using-python
What is GeoJSON and why should you care about it?

This driver is built-in by default

This driver implements read/write support for access to features encoded in GeoJSON format. GeoJSON is a dialect based on the JavaScript Object Notation (JSON). JSON is a lightweight plain text format for data interchange and GeoJSON is nothing other than its specialization for geographic content.

GeoJSON is supported as an output format of a number of services: GeoServer, CartoWeb, etc.

Starting with GDAL 2.1.0, the GeoJSON driver supports updating existing GeoJSON files. In that case, the default value for the NATIVE_DATA open option will be YES.

Starting with GDAL 2.3, the URL/filename/text might be prefixed with GeoJSON: to avoid any ambiguity with other drivers.

A GeoJSON datasource is translated to single OGRLayer object with pre-defined name OGRGeoJSON:

It is also valid to assume that OGRDataSource::GetLayerCount() for GeoJSON datasource always returns 1.

Starting with GDAL 2.2, the layer name is built with the following logic:

Accessing Web Service as a datasource (i.e. FeatureServer), each request will produce new layer. This behavior conforms to stateless nature of HTTP transaction and is similar to how Web browsers operate: single request == single page.

If a top-level member of GeoJSON data is of any other type than FeatureCollection, the driver will produce a layer with only one feature. Otherwise, a layer will consists of a set of features.

According to the GeoJSON Specification, only the Feature object must have a member with name properties. Each and every member of properties is translated to OGR object of type of OGRField and added to corresponding OGRFeature object.

It is possible to tell the driver to not to process attributes by setting environment variable ATTRIBUTES_SKIP=YES. Default behavior is to preserve all attributes (as an union, see previous paragraph), what is equal to setting ATTRIBUTES_SKIP=NO.

If the NATIVE_DATA open option is set to YES, the Feature JSon object will be stored as a serialized JSon object in the NativeData property of the OGRFeature object (and “application/vnd.geo+json” in the NativeMediaType property). On write, if a OGRFeature to be written has its NativeMediaType property set to “application/vnd.geo+json” and its NativeData property set to a string that is a serialized JSon object, then extra members of this object (i.e. not the “property” dictionary, nor the first 3 dimensions of geometry coordinates) will be used to enhance the created JSon object from the OGRFeature. See RFC 60 : Improved round-tripping in OGR for more details.

Similarly to the issue with mixed-properties features, the GeoJSON Specification draft does not require all Feature objects in a collection must have geometry of the same type. Fortunately, OGR objects model does allow to have geometries of different types in single layer - a heterogeneous layer. By default, the GeoJSON driver preserves type of geometries.

However, sometimes there is a need to generate a homogeneous layer from a set of heterogeneous features. For this purpose, it is possible to tell the driver to wrap all geometries with OGRGeometryCollection type as a common denominator. This behavior may be controlled by setting the configuration option to YES (default is NO).

By default, the driver will write GeoJSON files following GeoJSON 2008 specification. When specifying the RFC7946=YES creation option, the RFC 7946 standard will be used instead.

The differences between the 2 versions are mentioned in Appendix B of RFC 7946 and recalled here for what matters to the driver:

How to query features from remote service with filtering by attribute:

How to translate number of features queried from FeatureServer to ESRI Shapefile:

How to translate a ESRI Shapefile into a RFC 7946 GeoJSON file:

GeoJSON[1] is an open standard format designed for representing simple geographical features, along with their non-spatial attributes. It is based on the JSON format.

The features include points (therefore addresses and locations), line strings (therefore streets, highways and boundaries), polygons (countries, provinces, tracts of land), and multi-part collections of these types. GeoJSON features need not represent entities of the physical world only; mobile routing and navigation apps, for example, might describe their service coverage using GeoJSON.[2]

The GeoJSON format differs from other GIS standards in that it was written and is maintained not by a formal standards organization, but by an Internet working group of developers.[3]

A notable offspring of GeoJSON is TopoJSON, an extension of GeoJSON that encodes geospatial topology and that typically provides smaller file sizes.

The GeoJSON format working group and discussion were begun in March 2007[4] and the format specification was finalized in June 2008.

In April 2015 the Internet Engineering Task Force has founded the Geographic JSON working group[5] which released GeoJSON as RFC 7946 in August 2016.

Points are [x, y] or [x, y, z]. They may be [longitude, latitude ] or [eastings, northings]. Elevation is an optional third number. They are decimal numbers. [6]

TopoJSON is an extension of GeoJSON that encodes topology. Rather than representing geometries discretely, geometries in TopoJSON files are stitched together from shared line segments called arcs.[7]Arcs are sequences of points, while line strings and polygons are defined as sequences of arcs. Each arc is defined only once, but can be referenced several times by different shapes, thus reducing redundancy and decreasing the file size.[8] In addition, TopoJSON facilitates applications that use topology, such as topology-preserving shape simplification, automatic map coloring, and cartograms.

A reference implementation of the TopoJSON specification is available as a command-line tool to encode TopoJSON from GeoJSON (or ESRI Shapefiles) and a client sideJavaScript library to decode TopoJSON back to GeoJSON again. TopoJSON is also supported by the popular OGR tool as of version 1.11[9] and PostGIS as of version 2.1.0.[10]

Given a GIS shape near coordinateslatitude 0° and longitude 0°, a simple but valid and complete topojson file containing all metadata, Polygon, LineString, Point elements, arcs and properties is defined as follows: 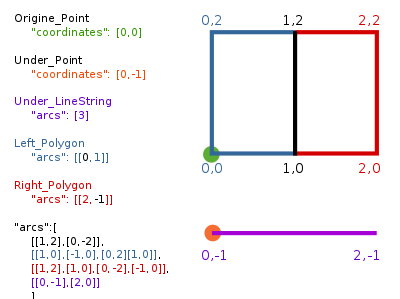 Sours: https://en.wikipedia.org/wiki/GeoJSON
HOW TO ADD RASTER IMAGE AND CONVERTING TO GEOJSON FORMAT

Convert a raster to GeoJSON polygons in PostGIS

If you look at the example on the man page for ST_PixelAsPolygons you will see how you can access the geometries using syntax (similar in spirit to how ST_Dump works to turn a set or records into individual rows). Following on from that example, you can pass to the ST_AsGeoJSON function, eg,

which will return the three rows:

If you wish to turn this into a FeatureCollection, you can use a combination of row_to_json, array_agg and array_to_json to group the rows together into an array and add in the "type":"FeatureCollection" before the features array. The general idea is that you select the 'Feature', the GeoJSON representation of the geometry and the properties in one subquery, and then use array_to_json and array_agg to group this into an array of features, with 'FeatureCollection' as type before the array. Finally, you select row_to_json to group this all together inside {}.

Note you have to do the nasty subselect on the properties -- in your case the raster pixel values -- to avoid the labels being f1, f2, etc. See this Postgres Online article for more information.

Note: You need to cast the ST_AsGeoJSON to JSON, with the :: operator, or else you will end up with all the quotes being escaped, as \" in the output.